During the last month, the cannabis sector has been trending to the upside and has come well off its 2020 lows.

The recent trend to the upside follows a long period of sustained weakness and Canadian Licensed Producers (LPs) were a major underperformer during this time. Due to the volatile trend, we have been cautiously optimistic with the Canadian sector and have been waiting for the right time to re-enter.

In June, Canada reported to have generated more than $200 million of sales revenue from cannabis. This represents more than 30% growth when compared to the amount of revenue that was generated in January and this is a trend to be aware of. 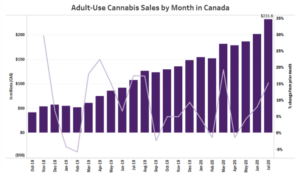 If sales revenue stays at these levels, the Canadian cannabis industry would be generating more than $2.7 billion of revenue on an annual basis. When compared to prior years, the Canadian cannabis industry has recorded incremental sales growth. The primary drivers of the growth were the legalization of recreational cannabis in October 2018 and the legalization of cannabis derivative products (i.e. edibles, beverages, concentrates, topicals, capsules, and more) in December 2019.

We believe the Canadian cannabis industry has reached an inflection point and expect to see increasing demand for cannabis derivative products on a going-forward basis. A majority of leading Canadian LPs have been under heavy pressure so far this year and this is a trend that we expect to change as domestic sales numbers continue to ramp higher.

Another reason for our positive outlook on the Canadian cannabis sector is related to the international market. During the last year, several major international markets have legalized cannabis and we are bullish on the opportunity in the European Union (EU) and South America. The EU continues to be our favorite legal market for Canadian cannabis companies to capitalize on and believe that companies need to have leverage to this market to be successful over the long-term.

If you are interested in learning about the companies that have been capitalizing on the Canadian and the international cannabis market, please send an email to support@technical420.com to be added to our distribution list and to learn more!

Michael Berger is Managing Partner of StoneBridge Partners LLC. SBP continues to drive market awareness for leading firms in the cannabis industry throughout the U.S. and abroad.